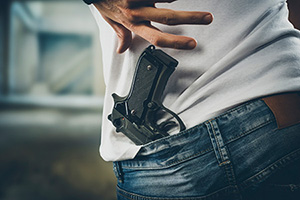 While a state crime is a violation of an ordinance or statute passed by a state’s legislature or local authority, a federal crime is a violation of one of the statutes passed by the congress of the United States of America. The prosecution of federal crimes deals with any type of criminal activity that is of national concern, and as such, federal agencies (such as the FBI, DEA, Secret Service, ATF) will be involved in the prosecution of these cases. In many cases, however, crimes (such as certain drug crimes) will be prosecutable at both the federal and state levels. Houston federal crime lawyer Paul Darrow has extensive experience, contact us for a consultation.

While most criminal cases filed in the state of Texas will be prosecuted by the state or county district attorney’s office, some cases will wind up in federal court due to the nature of the crime. These may be cases involving national security matters, corruption, internet computer offenses (including internet identity theft charges), child pornography charges, drug conspiracy charges, and high level drug charges. Federal weapons offenses and even kidnapping and murder are included in this category.

Federal crimes can also involve those that need a white collar crimes lawyer such as bank fraud, visa or other charge card fraud, mail and wire fraud, money laundering, federal mortgage fraud, etc., or federal tax crimes, conspiracy, cyber-crimes (including internet pornography), or counterfeiting. Other crimes such as high level drug crimes are those where the manufacture or distribution of drugs is involved.

Those charged with such crimes will be facing serious consequences if convicted, as the government has typically invested much more time and effort in making their case against the accused. Those prosecuting these case are quite serious about bringing these well prepared cases to a successful conclusion. For that reason, it is wise to take such cases seriously and to contact legal counsel immediately.

Once the federal courts are ready to make their case, they will move swiftly. For example, those investigating federal crimes have invested months, or even years, building their case before arresting anyone, so you can be sure they will be quite invested in making whatever charges they are bringing stick.

For that reason and others, it is vital that you have an experienced and well-respected federal criminal defense attorney on your side. It is also important that you contact a criminal defense lawyer as soon as you believe you are under investigation for any type of federal crime, especially as the federal system is very different when it comes to those of the state of Texas itself.

Paul Darrow is a former prosecutor who understands how the system works at both the state and federal levels. His experience as a former prosecutor brings a wealth of valuable experience to his practice as a federal crimes attorney! If you are being accused of a federal offense or have reason to believe that you are the target of a federal investigation, you will want to make sure you have a defense team that will fight for you. Call our Houston federal crime lawyer Paul Darrow today at (713) 641-5300.