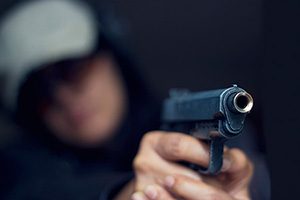 A weapons offense in the state of Texas can include possessing or carrying a weapon illegally, improperly firing a gun, or using a gun in the commission of a crime. Texas does not take these offenses lightly and you’ll need a skilled Houston weapons charges lawyer on your side or you could end up in jail if you are convicted of violating certain Texas weapon laws. Know, too, that weapons don’t just refer to guns; clubs, chemical sprays, and knives also fall under this category.

Additionally, providing a weapon to another person, or selling one, is also illegal. If you are responsible for allowing a child to gain access to an unsecured firearm, that can also earn you a weapons charge, even if you yourself have a legal right to it.

Possession of a Weapon

Be aware that police may also charge you with weapons possession or carry charges if they stop you on the street and find a weapon in your possession, if an informant gives them a tip that you have one, or if one is found on your person while you are being arrested for some other charge.

While certain weapons-related offenses are only misdemeanors, if you are convicted it can still have serious effects on your life because a criminal conviction will stay on your record, but hiring a Houston weapons charges lawyer can help your chances of fighting these charges. Criminal conviction records will be viewable in a background check by potential employers and others who have access to this information, including landlords, lending institutions, and business partners.

It is also illegal for anyone who has been convicted of a felony in the past (even a misdemeanor if it involves domestic assault) to possess any type of firearm with 5 years of being released from prison, jail, or completing probation.

Unless you have been licensed by the state to carry a concealed handgun, you may not legally do so except under very limited circumstances. For example, while you may carry a weapon to your car, if you are transporting it, it must be in plain view.

You are allowed to have one at your home or place of business. Even if you are a license holder, though, you cannot carry a gun in a church, hospital, amusement park, or at government meeting or sporting event. Doing so is considered a Class A misdemeanor. If you do so at a business where alcohol is being sold, you will be charged with a third-degree felony.

Using a gun carries other penalties altogether, especially if someone was harmed. Just firing a gun in public falls under the disorderly conduct statutes. The may be a misdemeanor, depending upon the circumstances. If a crime is committed and there was any type of violence involved, the offense is increased and it becomes a first degree felony, punishable by up to life in prison.

If you are being accused of any type of crime of this type, you need a weapons charges defense attorney who understands how to aggressively defend your case. Paul Darrow is a former prosecutor who brings a wealth of knowledge and experience to his criminal law practice. Paul Darrow understands the complexities of the laws in this area and can help. Clearly, the seriousness of the consequences will depend upon the circumstances, so be sure to contact Houston criminal defense attorney Paul Darrow right away for the guidance you need.