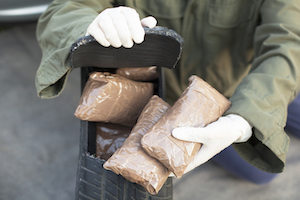 Needless to say, this is a serious matter in the state of Texas. The law is strict when it comes to trafficking as it targets dealers and manufacturers of illicit substances like heroin, cocaine, and marijuana, and being convicted of trafficking can result in thousands of dollars in fines and years in prison.

You should be aware that even if you had no intention of trafficking drugs, but were in possession of large amounts, you could be arrested on drug trafficking charges. For example, if you are found with a single marijuana cigarette in your pocket, you may indeed be charged with possession, but if you have several pounds of marijuana in your trunk or apartment, that is a very different charge altogether.

While the possession of any type of illegal drug can lead to serious charges, the intent as well as the amount in your possession is key when it comes to a trafficking charge. For example, if you are stopped by a police officer in a car you borrowed from your friend and a kilo of cocaine was found in the trunk, there is clearly a question about both your knowledge and intent.

Remember, though, that drug trafficking laws are intended to target dealers, so even if only equipment that is used to manufacture or sell drugs is found in your possession, you could still be charged with drug trafficking, and the penalties can be quite severe. In this case, you will need a Houston Drug Trafficking Attorney.

If you are convicted of drug trafficking, several things could happen as a result: you could go to prison, you could receive a fine, you could be put on probation, or a combination of these things could result.

Type of Penalties and Charges

The type of penalty you receive will depend upon several things, including which drug you were accused of trafficking, whether the crime is considered a federal or state level crime, how much you had in your possession and the type, etc. Penalties for drug trafficking can be severe, to say the least. At the state level, drug charges in Texas can be quite severe. For example, possession of between 200 and 400 grams of a Penalty Group 1 substance is an enhanced first degree felony in Texas, punishable by 10 to 99 years in state prison and a fine of up to $10,000.

Drug trafficking charges may be prosecuted at the federal level if drugs were transported across state lines, or brought into the country from Mexico, for example. At the federal level: Possessing 100-999 grams of a mixture containing heroin result in a minimum of 5 years in federal prison or a fine of up to $2000, while possessing 5 to 49 grams of pure methamphetamine can result in a minimum of 5 years in prison and a fine of up to $2000. If you have a prior offense for trafficking drugs, however, you could be facing double the prison term.

Once the federal courts are ready to make their case, they will move swiftly. It is important for you to contact an attorney with experience in criminal law for help as soon as possible. Paul Darrow is a former prosecutor and Houston drug trafficking attorney who understands how the system works. He brings a wealth of experience to his criminal defense practice and knows how to get results for those he is defending. If you are facing charges of any type of drug crime, make sure you have a defense team that will fight for you!  Call Paul Darrow today.