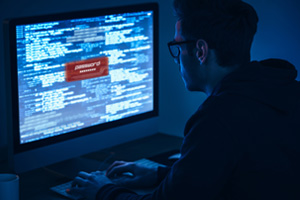 There is a wide range of Internet Crimes. Various methods that are targeting victims include hacking, identity theft, denial of service attack, internet fraud, credit card fraud and violation of child pornography laws. Governments and prosecutors are taking increasingly more aggressive steps to prosecute those that they accuse of internet crime. If you’re facing internet crimes, our Internet crimes lawyer Houston, Paul Darrow may be able to help.

A Hacker is a person who secretly gains access to a computer or computer network in order to acquire information with malicious intent to defraud, steal, or vandalize. When the hacker’s intent is to simply seek unauthorized access to a protected computer, such as any computer belonging to a financial institution, U.S. government or connected to the internet, he or she has committed a misdemeanor. But, if this misdemeanor offense is committed for furtherance of another crime or tort, financial gain or if the value of the information obtained is over $5000.00, then the misdemeanor becomes a felony.

Identity theft is illegal, deliberate use of someone else’s personal information, usually as a method to gain a financial advantage or to obtain credit, possibly to the other person’s loss or disadvantage. Identity theft occurs when someone uses another’s personal identifying information such as their name, social security number or credit card, without permission. The perpetrator’s actions may cause the person whose identity was stolen to suffer adverse consequences if the victim is held responsible for the theft’s actions.

Penalties and sentences depend on how many items were obtained, transferred or possessed by the defendant.

Number of items less than five:

Number of items between five and nine:

Number of items between ten and forty-nine:

A denial of service attack is an incident in which a single user or organization is denied the services of a resource they would normally expect to have. When large numbers of compromised systems attack a single target this is referred to as a distributed denial of service.

A DoS attack can be done in a many ways. The basic types of DoS attack include:

Internet fraud generally refers to any type of fraudulent use of a computer and the Internet to conduct fraudulent transactions, transmit the proceeds of fraud to financial institutions, or to steal, destroy or otherwise render unusable (for example the proliferation of viruses) computer data critical to the operation of a business. Internet fraud schemes may be perpetrated through e-mail, message boards, chat rooms, or Web sites. The penalties for internet fraud depends on the nature of the crime committed. Darrow Law firm P.C. can help you determine the type of penalties will apply to your case.

Credit card fraud is a broadened term for theft and fraud committed in a transaction using or involving a payment card as a fraudulent source of funds. The purpose may be to obtain unauthorized funds from an account or goods without paying.

All credit card fraud cases are considered felonies in Texas. The penalty for this is 180 days to 2 years in a state prison and/or a fine of no more than $10,000. If the offense was committed against an elderly person, however, the charge may be increased to that of a third degree felony. A third degree carries a penalty of 2 to 10 years and/or a fine of no more than $10,000.

In order to be convicted of Possession or Promotion of Child Pornography, the state’s attorney must show that a person intentionally or knowingly possesses or accesses, with intent to view, visual material that the person knows depicts a child younger than 18 years of age, at the time the image of the child was made, who is engaging in sexual conduct. In addition, there could be criminal charges if a person sells the pornography or even transports it. These are very serious charges with serious penalties. If you’re facing child pornography criminal offenses, contact internet crimes lawyer Houston, Paul Darrow, as soon as possible.

Intent to promote child pornography (possession of visual material that contains six or more identical depictions of a child):

Improper videoing or photographing a minor:

Sexual performance of a child:

Sexual performance of a child where the victim was under the age of 14 at the time of the offense:

The potential to do real harm is significant and prosecutors take Internet Crime very seriously. This means that if you have been accused of such a crime you could be facing substantial fines and a serious jail sentence. Sentences for high-level Internet Crime include lengthy prison sentences, hefty fines and restrictions on computer usage.

Paul Darrow has the experience you need to defend yourself from such charges and understands the unique legal issues surrounding Internet Crime cases.  To obtain the best results possible, early intervention is vital. Contact Paul today at 713.641.5300.