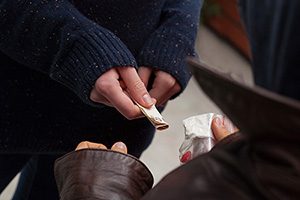 Paul Darrow is a Houston drug crimes lawyer that represents people accused of such crimes. Depending on the type of drug and the amount of the drug in possession at the time of arrest, the range of punishment could be anything from probation up to life in prison.

As a former felony prosecutor, Houston criminal lawyer Paul Darrow understands how these cases are investigated and prosecuted. He received training from some of the top legal minds in the area of 4th Amendment search and seizure law, and is dedicated to defending his clients’ constitutional rights.

Drug crimes fall under both federal and state laws in the state of Texas. While the state of Texas has several drug laws that may not apply to other states, federal offenses are regulated by the Comprehensive Drug Abuse Prevention and Control Act of 1970, and the Controlled Substances Act covers nearly all offenses that occur within the state. Either way, Texas considers drug offenses as among the most serious in criminal law.

Drug convictions carry some very severe penalties, including heavy fines and lengthy prison sentences; this means that there can be serious consequences on the lives of those convicted of them as well as those of their families.

A conviction, and therefore a sentence, for a drug offense, depends on several factors, including:

Additionally, any other factors that come in to play, such as the drug offense being combined with another offense (theft or assault) will also impact sentencing. If the offense is another felony, such as a violent crime, or there is a weapon involved along with the drug offense, of course the penalties will be much more severe.

Below are some of the most common drugs that are seized by law enforcement. If you are facing drug charges and have been reported handling these substances, Paul Darrow understands the legal process and can represent you.

If you are facing drug charges, you need knowledgeable legal representation immediately. Do not wait; contact Paul Darrow today. If we find any violations of the law or in police procedure we will file motions to have evidence of guilt suppressed from ever being heard by a jury. In many cases this leads to a complete dismissal of criminal charges.

Paul Darrow is a drug crimes defense attorney in the Houston – Galveston area of Texas. He uses his experience as a former prosecutor, and now as a successful defense attorney to fight for his clients. If you are facing a criminal drug charge conviction, he is an asset to have on your defense team.

When it comes to your freedom and your future, don’t take chances. Your choice of legal representation could make all the difference. Contact Houston drug crimes lawyer Paul Darrow today.