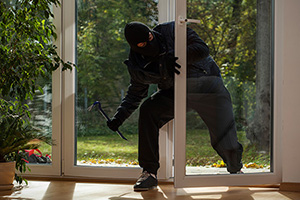 While each state has its own unique laws that define burglary and theft, attempted burglary, and criminal trespass, burglary is considered a serious crime in the state of Texas. The individual states also vary when it comes to crime and punishment for those crimes, but it important to understand that the state of Texas is one of the strictest when it comes to these issues, and those who are charged with these crimes may face severe penalties and lifelong consequences if convicted. Attorney Paul Darrow is a Houston theft crimes attorney with the experience needed to keep you out of jail.

As of June 30, 2016 there have been 51,266 total Houston theft crimes. After breaking down theft crimes including auto theft, burglary, robbery, and theft, we found that the most crimes occurred in the month of January and the least in February. Since February has fewer days than the other months, it makes sense there would be less total crime, but there were also significantly fewer theft crimes in March and April as compared to January, May, and June. 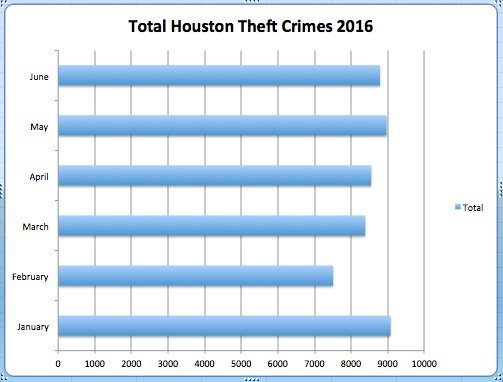 What is the Difference Between Theft, Robbery, and Burglary?

Oftentimes the terms “theft”, “burglary”, and “robbery” are all used interchangeably, but they aren’t actually the same thing. Although they usually relate to theft, as in taking something from another person without the intent to return it, they have slightly different meanings.

Of all the types of theft crimes committed in Houston in 2016, the vast majority were basic theft crimes, followed by burglary, auto theft, and robbery. If you or a loved one is facing a theft charge, contact Houston theft crimes lawyer Paul Darrow today.

While burglary is technically a theft charge, it is even more serious because of the trespassing element that is involved. According to Texas law, when someone enters a home or any part of a building that is not open to the public with the intent of committing a theft, assault, or felony, or when that person remains concealed inside the building with the intent of doing so, a burglary is the intention.

Someone entering into another’s vehicle with the intent to commit any type of theft, for example, is considered burglary, as is breaking into a coin-operated machine. Even if the theft did not actually take place, the person breaking into the property may still be found guilty, simply because the intent was present.

Being convicted of burglary means that person could face up to two years in jail and be fined up to $10,000. If, however, the crime was committed in someone’s home, the burglar could face up to 20 years in prison. If property such as a coin-operated machine was the target of the burglary, penalties still apply. While this is considered a misdemeanor and may carry no more than one year in jail, you may also face a stiff fine of up to $4,000. As you can see, the state of Texas takes this very seriously and calls these second-degree felony charges. Once jail time and probation occur, you may reach a point when an order of non-disclosure is possible and you can speak with us regarding the procedure.

Another common type of burglary or theft is called vehicle burglary. This is when a car is broken into or entered into without the owner’s permission with the intent to commit a felony or a theft. This is typically considered a Class A misdemeanor and carries a potential one year in jail. If, however, the burglar has two or more similar convictions on his or her record, that charge can be raised to two years in a state jail as repeat offenses can be elevated to felony charges.

Just because you had no intention of taking anything (as in burglary) or harming anyone (as in assault) when you entered the property does not excuse you from being on another’s property. In other words, the lack of intent to commit a crime is not the point. Merely entering or remaining without consent constitutes trespass. Remember, too, that just because you were not directly told not to enter does not imply permission to do so.

Typically, criminal trespass is a Class B misdemeanor (except in certain areas such as agricultural or freshwater areas), but the crime can be increased to a Class A misdemeanor if the offense was committed in someone’s home or other habitation, or if the use of a weapon was involved.

Needless to say, such serious charges like these can wreak serious havoc on an individual’s life. If you are faces burglary charges, contact Houston Theft Crimes Attorney Paul Darrow today. Paul’s experience as a former prosecutor brings a wealth of experience to his practice as a criminal defense attorney and he uses this experience to help each of his clients. Call today (713)641-5300