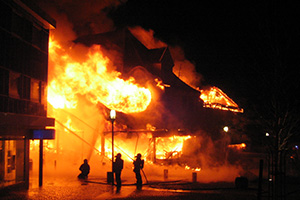 In the state of Texas, arson is the purposeful act of intentionally starting a fire that is intended to deliberately and maliciously damage or destroy wild-land, buildings, vehicles, or even dumpsters. It is distinguished from fire types such as spontaneous combustion and natural wildfires. Setting a fire and causing damage to vegetation, fences, or any structure on the property is also considered arson.

The penalties for arson are harsh and can be charged as a felony crime in the state of Texas, which is why it’s so important to have the help of a skilled Houston arson attorney. The degree of the crime and applicable consequences will vary by the type and degree of the offense.

First Degree Penalty Arson in the State of Texas

First degree arson is defined as the act of causing any type of fire, explosion, or combustion for the purpose of the destruction of property, damaging of land, buildings, or vehicles. A first degree felony arson charge is punishable by between five and 99 years in prison (life in prison) along with a possible fine of up to $10,000.

Starting a fire is still considered arson even if the fire goes out before any damage is caused. The intention is the key here. If someone is killed or suffers serious injury, the arsonist could be charged with first degree arson. If the person who started the fire was reckless about the life of another person or jeopardized the safety of someone else’s property, a charge of first degree arson could also be the charge. If arson is committed and there was a clear intent to kill, however, the individual responsible for the arson can be charged with capital murder and receive a sentence of life in prison. You will need a Houston Arson Attorney right away to defend your rights.

Second Degree Penalty Arson in the State of Texas

Second degree arson may be the charge if the act was intended to only cause damage to property. This offense is punishable by a possible fine of up to $10,000 along with between 2 and 20 years in prison. A person found guilty of this type of crime could be charged with first degree felony, however, if the building was someones home or a place of worship. Any act where a fire was started intentionally, but the damage done was done so recklessly, can be charged as a state jail felony punishable by between six months and two years in jail in the state of Texas. Arson that occurs in the course of manufacturing drugs will also be considered a state jail felony, punishable by 6 months to 2 years in jail.

It is also important to know that fire can be found to have been used as a deadly weapon, and that there may be additional penalties involved in that case. Additionally, it could have an effect on the possibility of probation or parole.

Fires that are determined to be arson are often the basis of charges of insurance fraud, as well. When someone starts a fire that is insured for damages, or if a fire or explosion is recklessly set without regard for the safety of others or their property, that will also have a bearing on the outcome.

That means if you do something like start a campfire or play with fireworks in dry woods despite a burn ban, and the fire causes damage, you could be charged with arson. The same applies if you accidentally start a fire that causes damage while trying to manufacture a controlled substance. Criminal charges can be detrimental and you may need an order of non-disclosure and depending on the circumstances, we may be able to help.

Criminal Mischief Charges in the State of Texas

Criminal mischief is defined in the state of Texas as knowingly causing damage to or tampering with another persons property in such a way that financial loss results. That could include anything from slashing the tires on someone else’s car to vandalizing a place of business. Criminal mischief charges depend for the most part on the value of the damages. Even if damage was caused unintentionally but was done so as the result of recklessness, it could be considered a Class C misdemeanor. If you please guilt to a class C misdemeanor in Texas, you may be eligible for an expungement. Contact Houston arson attorney and Houston expungement attorney for more information.

If you cause damage unintentionally, but while acting in a reckless manner, it is a Class C misdemeanor. Otherwise, the penalties for a criminal mischief charge depend largely on the value of the damage.

When it comes to your freedom and your future, don’t take any chances or settle for second best. Choose legal representation that will make the difference by Darrow Law Firm P.C. today. If you are under investigation for any type of arson crime, it is imperative that you obtain qualified legal representation as soon as possible.